I was highly chuffed and deeply honoured to be involved with the wonderful Headingly Lit Fest again this year. Last year I performed at Outside In, alongside poets and musicians from all over Leeds. This year’s event was similar, with some familiar faces and some delightful, new discoveries.

The Heart Centre in Headingley is a great space for an event such as this. It somehow has a nice, warm atmosphere that dispels nerves and encourages foot tapping and clapping from the audience. I had opted for poetry only this year, as due to the recent house move I’ve not had much time to practice my guitar and currently sound like I’m playing it with large sausages strapped to my hands. However, I had penned a few pieces recently and was looking forward to showcasing them. I was much more excited to see the other talent on offer though, and got comfy with my glass of discounted wine to enjoy the show. 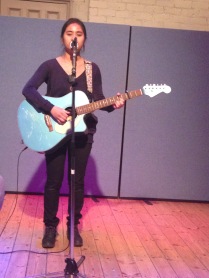 The first performer, Kari Medalla, was an absolute delight. With a gorgeous, blue acoustic Fender and an even lovelier, mellow voice with just the tiniest touch of gravel, Kari treated us to a very smooth cover of Tracy Chapman’s classic, Fast Car. She followed this up with a beautiful Spanish song, the title of which I can’t remember.

We bathed in moonlight

The spring light washed our sins away. 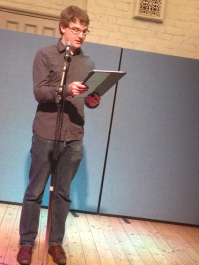 poet was John Darley, who has been published and this does not surprise me at all. This is a poet I would like to read; his performance was great, don’t get me wrong! But his words weave together so delightfully it would be a joy to see them written down. One memorable title was Cathode Ray. I’m probably parapharasing here, but something along the lines of

There is static in the sky and shouts of clouds on the pavement.

John creates a sharp staccato of words that pierce the brain, but you are glad of it. A happy trepanning.

The feeling so far has been pretty downbeat, but Lewis King rescues us from all that depression. Anyone who can start their set with a limerick is alright in my book. There then followed an amazing tale of a journey to the centre of the hoover. I won’t spoil it for you as no doubt it will be published one day, but this was a lovely piece of dark humour; and not just because there were no lights in the vacuum bag. My favourite part of Lewis’s act had to be the 6 word stories though:

No! Your child is cursed instead! Classic.

Samantha Crossfield takes us on a tube journey, each short story an internal monologue of a different passenger, one thought linking to the next. There seems to be a theme of being able to explore the flaws of others whilst ‘tripping over’ your own, and also of deep introspection. I could imagine the rickety sounds of the tube as a background track, and lights flashing and dimmed to immerse the audience even further.An interesting idea which could easily be built upon to make a full stage show if Samantha so desired.

Sophie Joelle reads us the first chapter of her t

eenage fiction story. I’m sad to say I can’t remember the title, as this is one I will definitely be looking out for. Our whole table agreed we would have liked to have heard more. From the first few lines, Sophie grabs you with brilliant character development and believable dialogue; something I often find lacking in much ‘teenage’ fiction (yes, I read Hunger Games). The conflicting and corresponding tensions of sport and romance come to life, and I still wonder if the protagonist keeps the girl… I hope to find out one day!

to some more music.

Billy Humphries plays a few songs on acoustic guitar, and despite citing severe nerves, makes them sound rather beautiful. His guitar playing has a distinct, smooth sound and his vocals are sure and nowhere near as wobbly as he seemed to be in himself! One song proclaimed that the only one that could keep me high is you, another sang the praises of a certain Mary-Jane. A possible theme?

I hope it’s not another two and a half years before Billy plays again. He clearly has a talent and I

was pleased to see it showcased last Friday.

As I said before, there were some performers on the bill who I had played alongside last year, and was excited to see again. The next performer was the one I had been most excited about: Owen Spafford, on the violin. This young man, easily the youngest performer at Cabaret Thirty, is just astounding. And it isn’t because of his age. If he was 30, 60 or 160, I would still be as impressed by his jigs and reels, and his effortless mastering of the fiddle. This is where the foot tapping and clapping really came into their own, with a showcase of folk music from ancient to modern times. I hope this guy keeps this up, purely for the selfish reason I love hearing him play!

Ethan Lowe enchanted and slightly dismayed us with a modern creation myth inspired by Michio Kaku.

Before there were days, a being came into existence.

As much an exploration of human nature as it is an imaginative and creative story, this piece was highly enjoyable

Ethan’s next piece, Wooden Night, carried a completely different tone and provoked a few laughs and a few groans. We talked about it on the way home though Ethan, just so you know. A Halloween tale with a twist.

This particular event was very special to me, as it’s the first time I had heard my sister, Kirsten Savage, perform live with her Bouzouki. The bouzouki is a greek instrument oft played in Ireland in place of the mandolin. Kirsten has clearly taken the

instrument and made it her own, with a mixture of folk, rock and original riffs and motifs that blend into a unique style and melody that complement her gorgeous voice perfectly. Kirsten’s songs have a quality reminiscent of opera; beautifully tragic, dynamic and extremely dramatic for one vocalist with an acoustic instrument.

The night concluded with a couple of songs sung by a lady called Jenny, who was not on the programme and borrowed Kari’s guitar. She was a welcome addition though, singing first a Brazilian song, then a Dutch one (albeit in English). Kari ended the evening for us with a Japanese song that was absolute gorgeous. I think it was called Goodbye Days, and was a classic J-Pop ballad with those odd English words thrown in every now and then.

If Cabaret Thirty is a sign of things to come, then we are very lucky indeed, as Leeds is growing and promoting some very fine talent indeed. Long may it continue.

← Why am I a Celtic witch?
Feeding the Birds →